Sebring (pronounced “sea bring”) Raceway is one of the oldest continuously-operating race tracks in the United States, its first race being run in 1950. Sebring is one of the classic race tracks in North American sports car racing and plays host to the 12 Hours of Sebring, one of the legs of the unofficial triple crown of endurance racing.

The raceway occupies a portion of Sebring Regional Airport, an active airport for private and commercial traffic that was originally built as Hendricks Army Airfield, a World War II training base for the U.S. Army Air Forces.

The course of the track is 3.74 miles (6.02 km) long. It is a seventeen-turn road course with long straights, several high-speed corners, and very technical slower corners. Many of the turns and points along the track are named for the early teams and drivers. There is very little elevation change around the track and little camber on the surface, providing a challenging track for drivers, especially when it rains.

Sebring is renowned for its rough surface. The course still runs on old sections of World War II-era landing fields that were constructed of concrete sections with large seams. The transitions between sections are quite rough and often, sparks fly from the undercarriages of the cars as they traverse them. Much of the track has intentionally been left with its original concrete runway surface. The track surface has 3.04 miles (4.89 km) of asphalt and 0.7 miles (1.1 km) of concrete. Mario Andretti, a 3-time 12 Hours winner, said that one of the hardest parts about the original Sebring track was finding the track, to begin with! There had been many accounts of drivers retiring due to accidents at night, quite simply because they got lost on the runway sections and couldn’t find the track again. Some drivers got lost even during the day, mostly because the track was poorly marked down with white lines and cones. 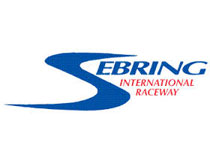