Since opening in 1959, it has been the home of the Daytona 500, the most prestigious race in NASCAR. In addition to NASCAR, the track also hosts races of ARCA, AMA Superbike, Grand-Am, and Motocross. The track features multiple layouts including the primary 2.5 miles (4.0 km) high-speed tri-oval, a 3.56 miles (5.73 km) sports car course, a 2.95 miles (4.75 km) motorcycle course, and a .25 miles (0.40 km) karting and motorcycle flat-track. The track’s 180-acre (73 ha) infield includes the 29-acre (12 ha) Lake Lloyd, which has hosted powerboat racing. The speedway is owned and operated by International Speedway Corporation.

The track was built in 1958 by NASCAR founder William France Sr. to host racing that was being held at the former Daytona Beach Road Course. His banked design permitted higher speeds and gave fans a better view of the cars. Lights were installed around the track in 1998, and today it is the third-largest single lit outdoor sports facility. The speedway has been renovated three times, with the infield renovated in 2004, and the track repaved in 1978 and 2010. On January 22, 2013, the track unveiled artist depictions of a renovated speedway with five new entrances, another pedestrian bridge, and an expanded grandstand. 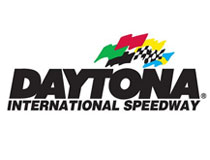